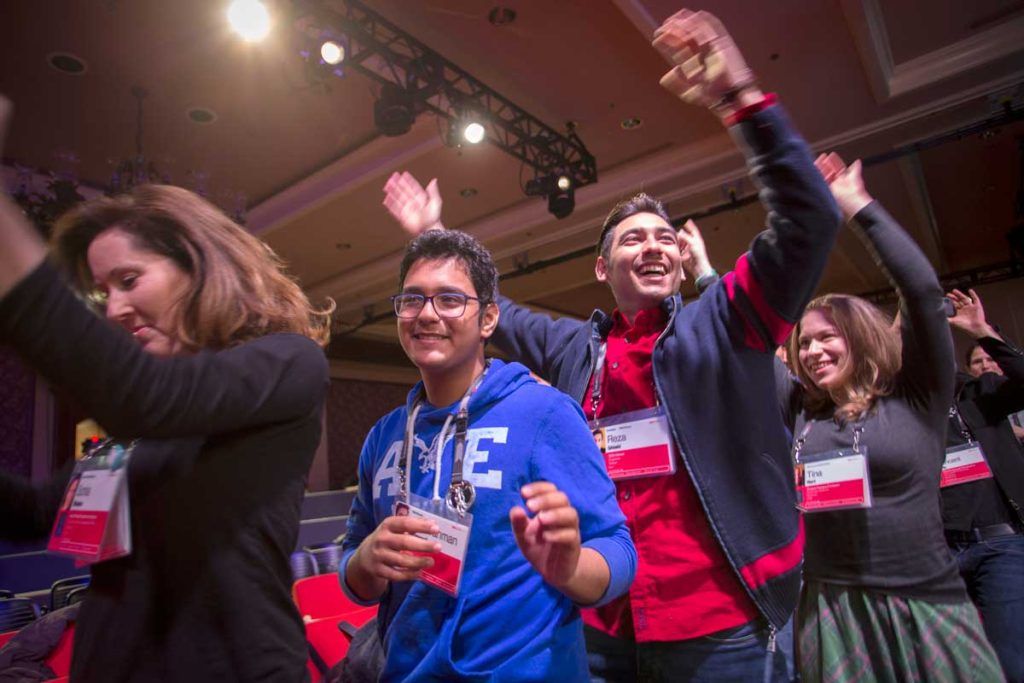 If you ask any TEDx organizer what is your TEDx story, you’ll get an answer that amazes you. It is now more than six years that TED—a conference with the mission of sharing “Ideas Worth Spreading,” launched one of the world’s most successful programs called TEDx. A TEDx is a TED-like event for the local communities. According to TED, the mission for TEDx is to “empower communities everywhere to organize events that connect people, spread ideas, and inspire positive impact.”

But this was not the mission for TEDx from the beginning. TEDx evolved and shaped itself, and it’s a mission. In other words, people who are involved in organizing and attending TEDx’es are developing. Just in the past 12 months, about 9,000 organizers all around the globe, hosted more than 3,000 events producing 18,000 TEDxTalks presenting local ideas worth spreading. Collectively together, these talks had views more than 450 million times. Among these TED-like experiences, is TEDxTehran, the first and the largest TEDx event in Iran which kicked off in 2013. I am very much involved in organizing TEDxTehran, and this is my TEDx story.

In 1999, I was one of a few lucky Iranians who had access to 36kb/second internet connection. kkkkccssshhhhhhhh… suddenly the sound of my little fax modem would be brought me to these parallel universes; I discovered the power of the internet. But it wasn’t until ten years later, that I found the real power of deep connection. I remember I was reading a blog when I suddenly saw this video named Barry Schwartz: The Paradox of Choice. It took me about three hours to download the video, and I watched it over and over. It was the perfect time for me to hear this idea. It was that ‘aha’ moment for me when I finally realized how to cope with too many choices. At the end of the video —or as TED put’s it: talk, I saw this attractive red logo: TED. When I clicked on the link below the talk, the website had about 50 videos on it, each presenting a simple, yet exciting idea of the world around me. I commented on one with the little English I knew, and immediately someone replied, the feeling of me being read and respond to was beautiful. I was part of a global movement of ideas.

I followed TED ever since, being that curious individual who had this little conversation with other people in coffee shops, get-togethers, and classes about these ideas. Until someday out of curiosity I googled [TED + Iran]and found an article on TEDx Tumblr announcing a TEDx is going to happen in Iran.

“I love everything about TED; I very much like to help TEDx taking place in my hometown. I can help in so many ways…”, was among the lines of the email I sent and resent a couple of times to TEDxTehran. In reply I finally received an email mentioning “At this stage the most important thing is awareness,” and in the signature area, it was “TEDxTehran Team” who was talking to me. Suddenly I found myself in a mission, to share the good news with my friends! At the time, I had about 200 Facebook friends. I persistently reached out to them to “like” TEDxTehran FB page, 190 liked, ten blocked, I did my best!

Fast forward to before the first TEDx event in Iran, the co-organizer, Sara Mohammadi interviewed me for the team. I was so excited that I couldn’t sleep the night properly before. I went there, and we talked, and she asked me questions, and all I had in mind is that, please give me a chance to be a part of this. I’m not sure if I deserve it, but I need it.

Less than two weeks later, I received an email starting with “Congratulations. You have been accepted as part of the TEDxTehran Volunteer Team”. I was in! I was happy and passionate. So I did what I always do when I love my job, I did my best, and Sara did what every good leader does, she saw qualities in me and gave me the chance to bring the best out of them. The team was well organized and enthusiastic. We did the first TEDx in Iran, and after that, I kept working and working until Sara passed the torch to me to hold TEDxTehran.

Job satisfaction comes with finding meaning in what you do, and what can be more satisfying for me to do such a meaningful job bringing people together to have a local and global conversation. So I started learning, TEDx rules, recommendations, files from other organizers, and the best experience ever: attending TEDActive 2014!

At the event not only I had the fun of my life, met some of the TED speakers who changed my life, and learned so many great ideas, I found that having a TED-like experience is not just about having great ideas on your stage, but it’s hidden in activating opportunities for people to meet and creating a “platform” for them to open their minds and “listen” to each other as well as “sharing their stories”. You see, in a TEDx, everyone is a speaker!

Here is what I think differentiates a TEDx from regular conferences:

I genuinely believe within each, and every second of each person’s life, unlimited opportunities are waiting to be activated — a chance to grow, to be better, thus to make the world a better place. With a population of around 9 million in the city and 16 million in the full metropolitan area, Tehran is the largest city and urban area of Iran, the second-largest city in Western Asia, and the 3rd largest in the Middle East. Tehran is always awake; you may sometimes see a traffic jam at 2 am!

As the essence of Iranians, Tehran is diverse. In this loving city, Persians, Kurds, Lurs, Turkic, Arabs, Armenians, and so many other groups came together to work and live together. This makes a perfect case for a TEDx, bring people across different backgrounds, cultures, views together.

Honestly, when they ask me why do I TEDx, I don’t know what to reply. I guess I enjoy the “unknown” people make when they are around each other, and I believe people do something great for themselves and each other as long as they feel belonged to a community that accepts them. While I’m sure it’s good for everyone, I’ll let good things happen as I help to bring people together to inspire a positive effect.

TEDxTehran inspired me to be a better person, encouraging me to develop personal and interpersonal skills. I also try my best to do the same for others, especially in our team. In TEDxTehran, we have natural leaders, people who voluntarily dedicate and sometimes sacrifice their time and effort to bring a TED-like experience for others.

It was lunchtime at our 2015 event on December 4, where we found out the company that was managing out catering forgot to bring enough bottle openers so our team can open 1000 bottles the attendees. I was passing one of our volunteers, Hassan, who was helping with the catering. Hassan was opening drink bottles with his bare hands, causing his right hand to bleed. I ran to him and told him to stop, in which he replied: “don’t we want the best TEDx experience for our attendees? I don’t want them to wait in line for too long, so I can’t wait for the can opener to arrive, I’ll do it myself.” This is more than volunteering; this is sacrificing for the others, a common habit for all leaders.

X is unknown for me like a strange road in which you can see a gorgeous light shining at the end of the horizon: a light which shows that you are on the right track, yet you have so many things to do to reach there.

I attended TEDGlobal>Geneva a few days ago. Besides so many cool technologies I got to see and so many great ideas I got to hear, there were so many cool “people” who were there to get inspired and to connect to understand more. That’s the feeling I would love for every TEDx attendee to have.